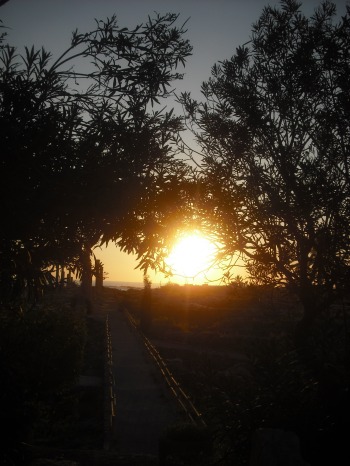 Sunset over the Roman ruins

A few days before Christmas we took my parents and my brother to the South of Lebanon, to the ancient city of Tyre, or Soor, to give it its Arabic name. Like Baalbek, one of Lebanon’s major tourist attractions, Tyre is on the foreign office warning list, which advises against all but essential travel in Lebanon south of the Litani River, due to its proximity to the Israeli border. 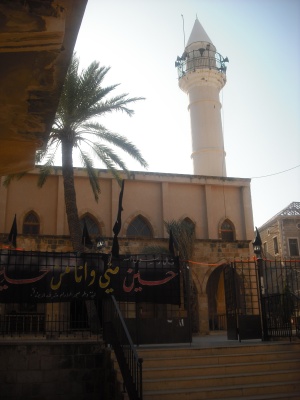 One of Tyre's many mosques

Unlike Baalbek, however, the lure of which is strong enough to temp a fair number of tourists, who will brave possible kidnapping to see it,  few venture to Tyre, only 20km from the Israeli border, and the site of frequent missile and shell attacks. In the past few weeks a number of bombings in off-licenses and bars has increased the prevailing wariness of visiting the South of Lebanon, despite the fact that no civilians have been injured in these attacks.

We spent a beautiful late December day wandering the old city, which has been strategically important to all the great empires of the past 5 or so millenia – the ancient Egyptians,  the Assyrians, the Greeks and the Romans  have all left their mark, as well as the Ummayads and the Crusaders. It played a central role in each of these great dynasties, and it is only since the establishement of the state of Israel in 1948 that Tyre has become steadily more and more marginalised, due in large part to the civil war and to the 2006 war between Israel and Hezbollah. This deterioration was obvious in the state of the buildings. The old city has some absolutely beautiful archtecture. Old stone houses line the narrow alleyways, interspersed at regular intervals by simple pale stone mosques, in the Muslim quarter, and simple pale stone churches, in the Christian. However, a large number of these beautiful old houses stand empty and derelict, with evidence of shelling wherever we looked: huge holes blown out of the ancient stone walls have in places been roughly patched with wood, in others left open to the wind and rain. Other buildings were left roofless, or half blown up. The cost of repairing all the damage would be catastrophic, and of course the loss of its tourist industry has dealt Tyre another blow.

Roughly patched walls in the alleyways 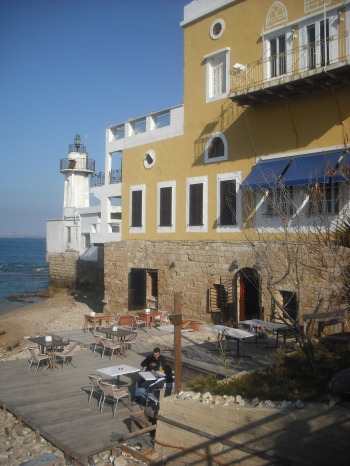 Lunch by the lighthouse

Despite the hard times Tyre has gone through in the last 50 years it remains a beautiful Mediterranean seaside town, with welcoming people and some amazing historical sites to visit. We spent some time wandering in the ancient souq before heading to the coast and round to the Christian quarter, a small area on the tip of the peninsular on which the old city is perched. Right on the tip of the furthest promontory we found a lovely old hotel, which the dreadlocked, Bob Marley loving barman and waiter told us had been standing there for over 2000 years. Called Al-Fanar, meaning lighthouse, for its proximity to Tyre’s old rusting, but still picturesque, metal lighthouse, it had a lovely little wooden seating area right next to the sea and we were able to sit in the sun in our T-shirts, eating some amazing mezze and drinking a cold beer with the waves breaking on the rocks right next to us.

After lunch we walked to the port, packed end to end with tiny fishing boats and huge piles of nets, laid out in the sun. We then carried on the souq, where Jared, to his great delight, got himself a lovely fur lined hoodie with the rather legendary words ‘REBELS Macroeconomic Cost Benefit Analysis’ inscribed on the back above a rather manly looking eagle. 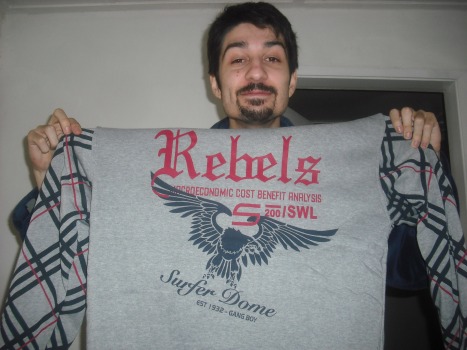 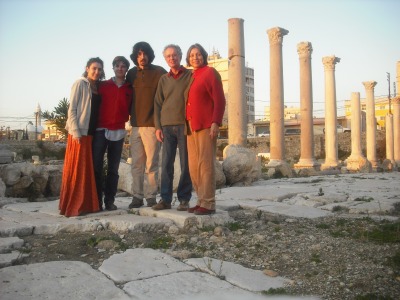 Walking in the ruins

While everyone browsed for other must-have items I got talking to the store owner, who initially thought I was Lebanese, as I was acting translator for the group. When he realised I was English he started asking me about what we think about and hear about the South of Lebanon in England and America. I told him that as tourists we are warned that it’s not safe to travel to the South, but that I thought it was a beautiful part of the world and somewhere that people shouldn’t be scared to travel. He then asked what we think about Hezbollah, a slightly more complex question. All I could say was that I couldn’t speak for everybody but that I thought that most of the Western press did not paint a very accurate portrait of Hezbollah. While they certainly have a bloody background, with links to kidnappings, muders and bombings, they have also done a lot of good in areas such as the Bekaa Valley and the South of Lebanon, which have been neglected by much of Lebanon’s post-war reconstruction, a fact certainly not widely publicised by the Western press. They have provided schools, hospitals, drinking water, electricity and other much needed infrastructure, such as passable roads, to areas more or less ignored by the Lebanese government.

Roman and Muslim architecture, side by side

It turned out that the man was a member of Hizbollah, like many Muslims in the South of Lebanon, and was very open and interesting to talk to. He told us about the 2006 war with Israel, pointing out the extensive damage to the surrounding buildings casued by Israeli shelling, and told us proudly that the number of Hezbollah fighters numbered only 2000, against 20,000 Israeli troups (internet figures put the number at 3000 to 10,000, increased to 40,000 in the final days). In spite of this, he said, Hezbollah had won. He continued ‘I am not a terrorist. I simply want to defend my country and my family’. The conversation was very interesting, and I liked that he had a good sense of humour, talking and laughing with my family with the little English he knew, telling us his side of the story without trying to force his ideology onto us.

We finished the day strolling among some of Tyre’s spectacular roman ruins, walking a columb-lined mosaic pathway down to the sea in time to watch the sunset.

While it is always best to be cautious, and to check the news and foreign office advice before travelling to unstable areas such as the South of Lebanon, it was also a trip that was informative and fun, and worth the minimal risks involved, and I would certainly recommend a visit to anybody visiting Lebanon.

10 thoughts on “The Hidden Treasures of Tyre and a meeting with Mr. Hezbollah”