Back to work yesterday after a weekend which cannot really be called a break from work, but was nevertheless a lot of fun. After a busy but very enjoyable week at the Daily Star, where I had the opportunity to write lots of culture articles, I spent Friday night baby-sitting. Samuele is used to me by now, which makes life easier when it comes to getting him to sleep. I am growing to love him dearly, though I do think he thinks he’s a dog, as evidenced by his reaction when I try to wash his face which is to lick me enthusiastically. He also took his chance while I was reaching for the towel and decided the simplest way to dry his face was just to wipe it energetically on the shoulder of my jumper, while attempting to chew it at the same time, thus proving his ability to multitask.

On Saturday I did some work for Everitte, after which we went to a little outdoor second-hand book fair in Gemmeyzeh, before heading down to the port to enjoy the sunshine. In the evening I had concert to review for the paper, a preview of the soon-to-be-released album by the Basel Rajoub Quartet, a group of young Lebanese and Syrian musicians who have come up with their own modern take on traditional oriental music, using saxophone, qanun, double bass and percussion. I arrived almost two hours early to interview Basel Rajoub and a partner in Edict Records, a new label who organised the event, so although the concert itself was very enjoyable the evening seemed to go on forever!

Beirut port in the February sunshine

Arriving back home just before 11pm I got a call from Everitte who was at a bar with some friends and wanted me to join them. We ended up at a club night organised by We Run Beirut, a group who organise occasional one-off raves in old abandoned buildings, with a make-shift open bar, DJs and video projections.

Saturday’s party was studio 54 themed, and as such by far the most 80s event I have ever attended. It was held underground in Hamra in an abandoned old theatre with all the seats ripped out to make a dance floor. With the ‘bar’ set up on a couple of trestle tables and the disco lights set on the floor to provide an 80s ambience it felt a lot like a school disco. Not that my school ever had a disco, but if they had, this would have been what it was like. Possibly minus the copious amounts of cheap spirits and the projections of 80s disco kings with huge moustaches thrusting in their catsuits to unwisely speeded up Boney M and bizarrely slowed down Michael Jackson.

I don't remember the disco lights being particularly phallic, but this picture speaks for itself.

Beirut does not have a large ex-pat community. As someone I work with told me recently “In the rest of the world it’s six degrees of separation. In Beirut it’s one degree of separation.” This turns out to be almost certainly true. On arriving at the disco-extravaganza I bumped into two co-workers from the Daily Star, who were with another guy I already know through mutual friends, who works at Time Out. He was in turn dancing with a guy who writes for NOW Lebanon, who Everitte had met a couple of nights before. Apparently journalists can’t resist an open bar. Or perhaps it was the 80s music that drew them like bees to a flower. 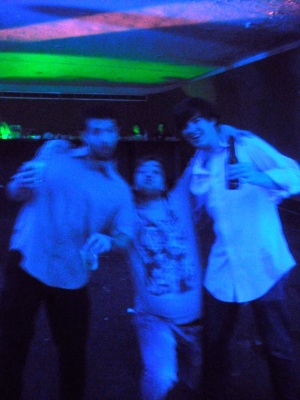 Don't have all the fun, boys, there'll be none left for anybody else

A few hours (and mohitos) later I met a very beautiful German girl called Joanna who used to take Arabic classes with me, and it turns out she knows the couple I baby-sit for, who in turn were introduced to me by the English editor at Hibr, the online paper I sometime write for.

Once all these connections had been established (which took a LOT of painful shouting as the music was so loud) we got down to some serious dancing. The room was so big and the people so few in comparison that we were able to run about like kids in a playground, jumping on and off the stage and making shadow-puppets on the projector screen, which at the time seemed both clever and amusing. 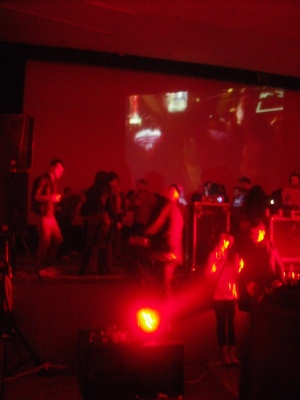 I don't remember the levitating couple (bottom right) either, but apparently they were there. Doing their thing.

The following morning, my plan of having two drinks maximum and being in bed by two having been thoroughly suppressed, I made myself get up at 10am, after 6 hours of much-needed sleep. I had to finish translating an article for Mashallah News, as well as write up the concert from the night before for the Daily Star, and I had foolishly encouraged our friends to wake up early and come on a trip down south to Sidon, to make the most of the sunshine after weeks of rain.

Three hours later, translation and article somehow miraculously completed and emailed, we set out, making our way down south in a rickety old servees taxi (otherwise known as a 12 seater van, transformed into a 15 seater by the ingenious process of adding three folding seats which necessitate everybody leaving the bus if a single person wants to get off).

The journey took forever, as the driver seemed to have a hatred of the main road and kept taking us off route through tiny villages and over bone-shaking speed bumps. Halfway there we stopped to fill up the tank, only to discover that the van ran on natural gas, rather than petrol, and had to be refilled via a hose from the ground in a dusty old barn in a tiny village. The smell of gas was heavy in the air (not ideal when you’re suffering from a mohito induced hangover) and had anyone lit up a cigarette I’m fairly sure that would have been the end of us. The nausea was added to by the driver shaking the whole van wildly in an effort to make sure he fitted as much gas in as possible – I don’t know how it works, but it must do because everyone here does it! 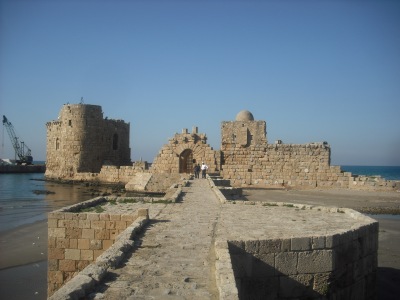 We spent a lovely day wandering in the sun in Sidon, exploring the crusader castle which is built out into the sea, and marvelling at Lebanon’s scaled down version of the Costa Concordia, which has parked itself between the castle and the corniche at a rather alarming angle.

After a lunch which took about 2 hours to arrive, but was totally worth it, consisting of freshly fried whole fish for $7 a pop, we explored the beautiful old souq. We ended up stopping for argileh (otherwise known as shisha) in a cave-like cafe, full of local men playing cards, smoking and drinking tea. We amused them no end by asking to borrow a pack of cards and proceeding to play amongst ourselves, drinking tea and smoking like real people. We in turn were equally amused and delighted by their hand-made generator, which consisted of two car-batteries, wired up to strip bulbs which had been hung from the ceiling on pieces of string.

Wonderful wiring in the souqs

On the way home a group of teenagers hanging out in the street got very excited to see us and shouted “Saida is international!” and “foreigners!” after us as we made our way to the bus station. It’s nice to cause such a stir just by strolling around with a hangover while desperate for a pee. Now I know how Angelina Jolie must feel.

All in all a delightful weekend, though not as relaxing as I might have hoped.. Still, we have Thursday off work as it’s the Feast of Saint Maroun. That’s right we get exotically named, delicious-sounding bank holidays here. I can feel your jealously.